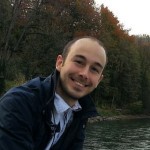 GuGames’ factotum. He likes to speak in plural because he dreams of a bigger team in the future, and because he’d like to acknowledge the work of all people involved in the creation of GuGames’ apps. But he’s mainly the only guy you have to blame for everything that doesn’t work in our games.

Other people
People who supported us in various ways

These aren’t actual team members, but we can’t stop thanking them for their support.

Andrea Serreli from Sir Reli Games is the main resource whenever our GUGA Engine needs a new feature. Sort of a living stackoverflow for adventure game engines, he’s currently working at his own adventure game, S. Cape Escape. Be sure to follow them.

Eleonora Guggeri is a professional sister who helped us design the main character in Kill Yourself and promised to help with the art on our next adventure game. While she isn’t drawing she spends her time organizing events for cosplayers, gamers and nerds in general.

Stefano Marras is helping us with design and testing. A developer himself, he dreams of joining GuGames as a full-time member since it would mean we have the money to pay him rent. Or maybe that’s what we dream. We never actually asked what his dreams are.

Sonia Masala is the proverbial great woman behind the great man, even if in her case the man is not that great. Much less nerdy and than all of us (that’s meant as a compliment!), she’s the person we refer to whenever we want an outsider’s perspective. She influences everything in the end product, from design to puzzles, from art to writing. And she cooks divinely.

Other thanks go to Serena “Serre” Merega and Nicola Melis whom we never stop to bother giving them updates on our projects even if they probably don’t care at all and just act eager to test our betas to make us happy.